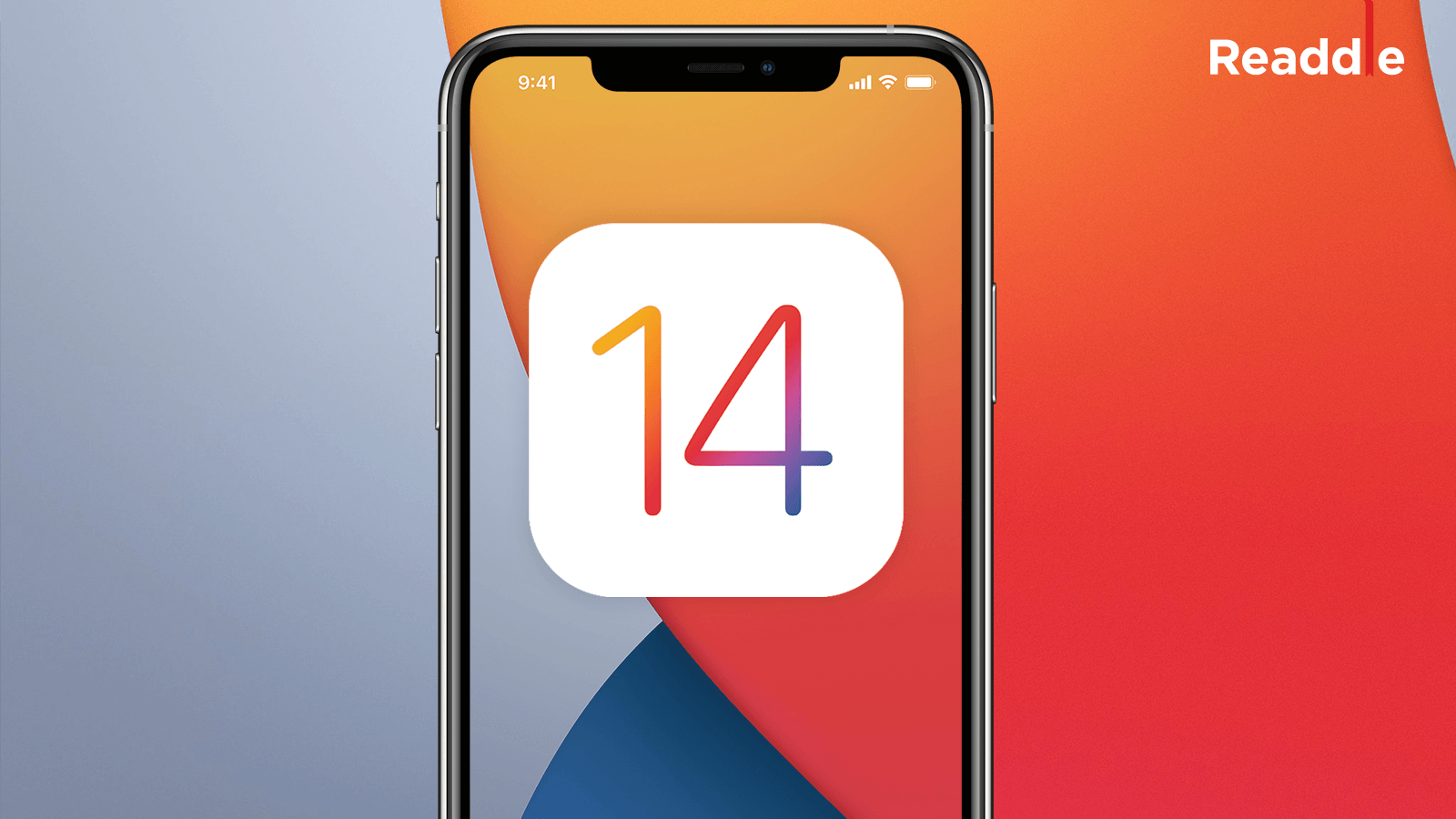 As part of its annual Worldwide Developer Conference (WWDC 2020), Apple held an online-only keynote on Monday morning where it announced the iOS 14 and iPadOS 14 operating systems. There are some incredible new features that these new versions of iOS and iPadOS will bring along and millions of iPhones and iPads across the globe will be eligible to upgrade.

I’m sure you’ve already read about all the big changes that will be coming to your iOS device this September, such as a redesigned home screen with App Library, app widgets, App Clips, Picture-in-picture for videos, improvements to Siri, Messages & Maps, etc. In this article, we’re going to tell you about some lesser known features of iOS 14 and iPadOS 14 that you probably haven’t heard about before. These hidden features of iOS 14 are sure to get you excited about the upcoming release in the Fall.

Note: Unless explicitly stated, all references to iOS 14 include iPadOS 14 as well.

The default keyboard on iOS now includes a way to search for any Emojis you want. That’s right, instead of wasting time swiping right to left and trying to find the perfect reaction in the sea of tiny emojis, you can now directly search and locate any emoji character using the default iOS keyboard.

Weirdly enough, Apple only seems to have added this feature to the iPhone — the Beta 1 of iPadOS 14 does not currently have Emoji Search. Let’s hope this is added in the upcoming betas of iPadOS & makes it to the final release in the Fall.

Apple is already known to add features to its products that help users be more conscious about their privacy. In iOS 14, the company has added a nifty Recording Indicator in the status bar. Whenever any app on your iPhone or iPad starts using the camera or microphone to record something, a round orange indicator will light up in the status bar to notify you of the same.

This works exactly like the green camera light on Mac notebooks, except that this also works for the microphone and unlike the notebooks, there’s no way to close the lid and shut the camera off.

3. Back Tap for Accessibility

Hidden inside an Accessibility feature in iOS 14 is an exciting new feature called ‘Back Tap’. You can tap on the back of your iPhone two or three times to run a custom action of your choosing. For example, you can set a Double Tap on to automatically take a screenshot of the home screen & a triple tap to lock the phone.

The Back Tap feature is not available on the iPad.

Starting with iOS 14, your iPhone and iPad will display banner messages to highlight certain privacy-invasive actions by third-party apps. For example, when an app tries to use Bluetooth to search for nearby devices, iOS 14 will immediately warn you about it. Similarly, if a third-party app reads the content of your clipboard, you’ll see iOS 14 throw up a banner message at the top of your screen.

iOS 14 will also display a similar banner if your AirPods are low on battery or when they switch to a different device. This is a handy warning as you no longer have to worry about manually checking your AirPods battery by opening the case.

Another exciting new feature arriving with iOS 14 is the ability to switch off “Precise Location” for certain apps. There are many apps that require access to your location, but not every app needs to know your precise location — such as weather apps. 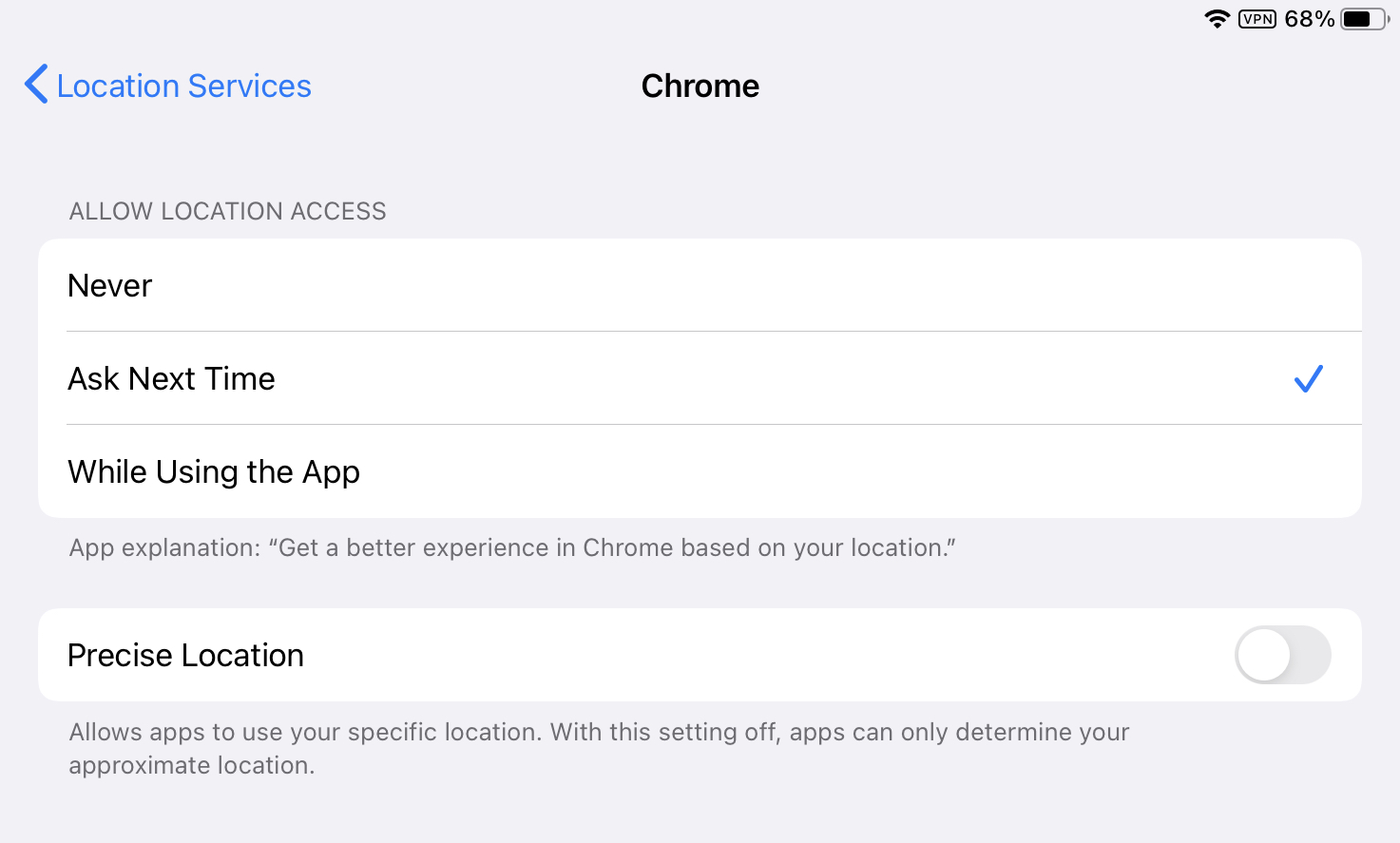 With this new Precise Location toggle in iOS 14, you can now share your approximate location and still get to use the app's functionality.

iOS 14 brings along a really useful feature in the form of the back button history. If you’re inside a navigation stack of views, you can now tap and hold on the back button to see a hierarchy of the views.

For example, if you’re in the Settings app and trying to change a setting for an app, you can simply tap and hold on the back button arrow and jump directly to the top level view.

Your Camera Roll or Photo Library on your iPhone or iPad quickly fills up with lots of photos and videos. This makes it nearly impossible to locate something in there, especially in a time crunch. Starting with iOS 14, you’ll now be able to manually add captions (or descriptions) to your photos and videos. This text can be anything you want, and helps to locate the photo when you search for it. 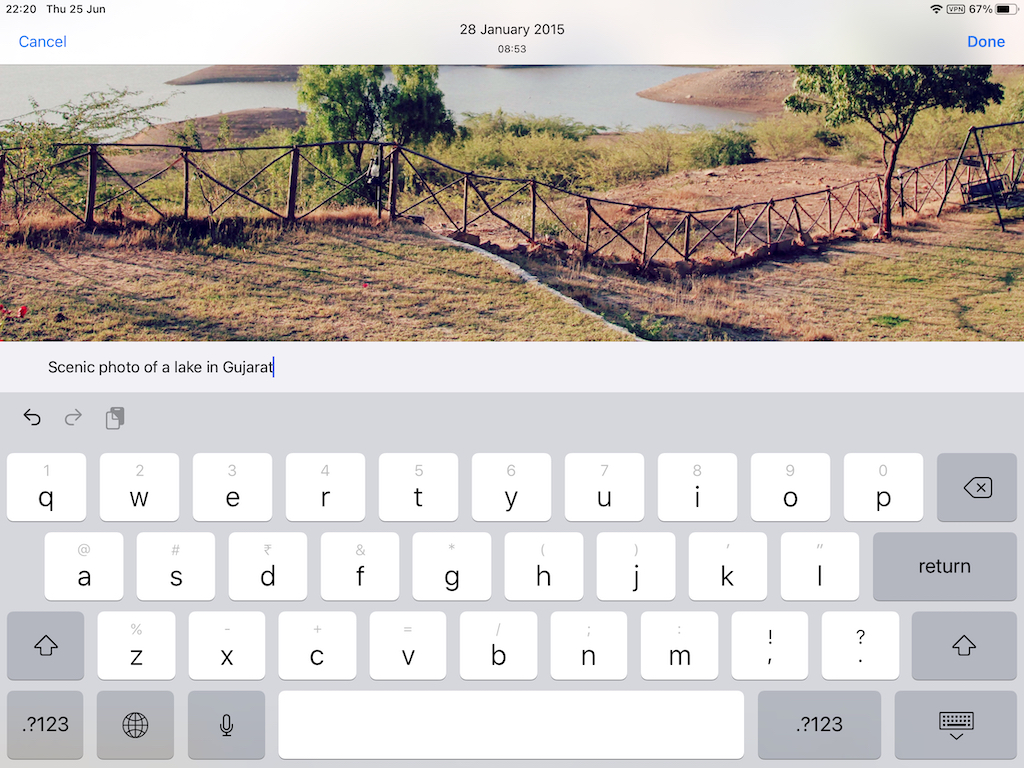 To add a caption to a photo or video in iOS 14, simply swipe up when viewing a photo in the Photos.app.

Safari on iOS 14 now includes a summary of the trackers that it blocks from following you across the web. You can view a 30-day report of known trackers prevented, percentage of websites that had trackers, the most contacted tracker, along with a list of all websites and trackers. Here’s what that might look like: 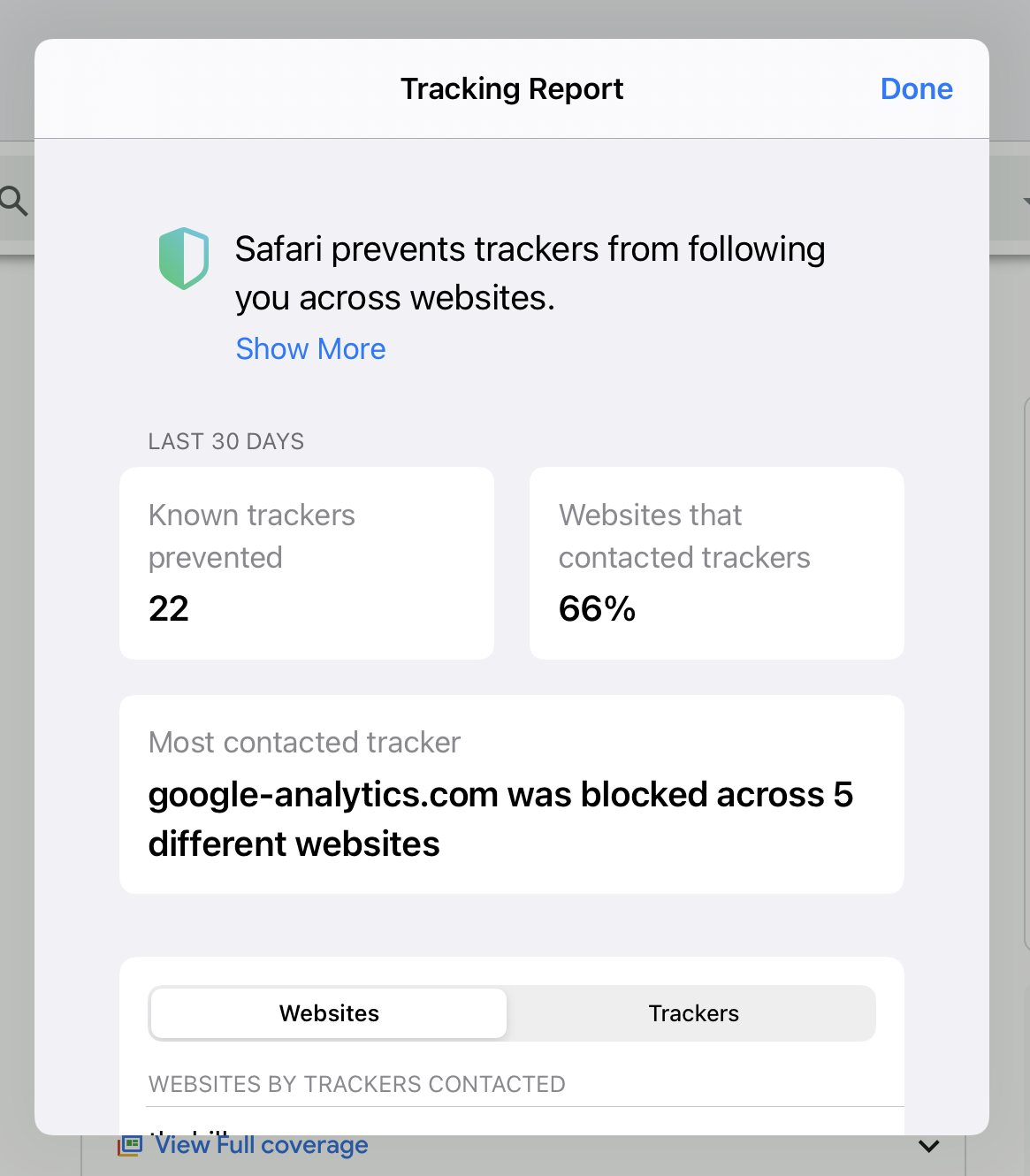 No surprises that google-analytics.com is the most contacted tracker here.

iOS 14 also introduces some very welcome changes to FaceTime calls. First, the Eye Contact feature that Apple had briefly enabled in iOS 13 betas is back again. With this feature, iOS smartly & computationally changes how your eyes appear to the other party because your eyes are looking at the screen and not the camera. This enables the impression that you’re making eye contact with the other party, making the conversation a lot more lively. This feature too is only available on iPhone.

Another feature that’s being introduced with iOS 14 is Sign Language Prominence. If on a Group FaceTime Call someone uses Sign Language, their video automatically gains prominence. Currently, only those people who are speaking using their microphone gain prominence on the call.

Apple has revamped the Universal Search functionality in iOS 14, which now features a Compact UI and works more or less like Spotlight on the Mac (or Alfred/Launchbar for power users). The redesigned UI for Search on iOS 14 is delightful and so much more intuitive.

In Search, you now have a default action already selected for your query. For example, if you enter “Insta” in the search bar, the “Go” action is already selected so you can just tap Return to launch the app. If you type a URL, Safari is automatically selected. If you type the name of an app that is not installed, a ‘Show More’ action automatically opens the App Store listing for the app. Essentially, this feature saves you the trouble of manually tapping on the screen as you can now just tap the return key on a hardware keyboard.

These two features are some of my favorite privacy-focused features in iOS 14. For various reasons, third-party apps require you to enable access to your Photo Library and Contact. This may be to upload or save photos from your library or share something to the email address or phone number of a contact. In many cases, you don’t actually need to share your entire library with the app, as the requirement is only for a select few photos or contacts. 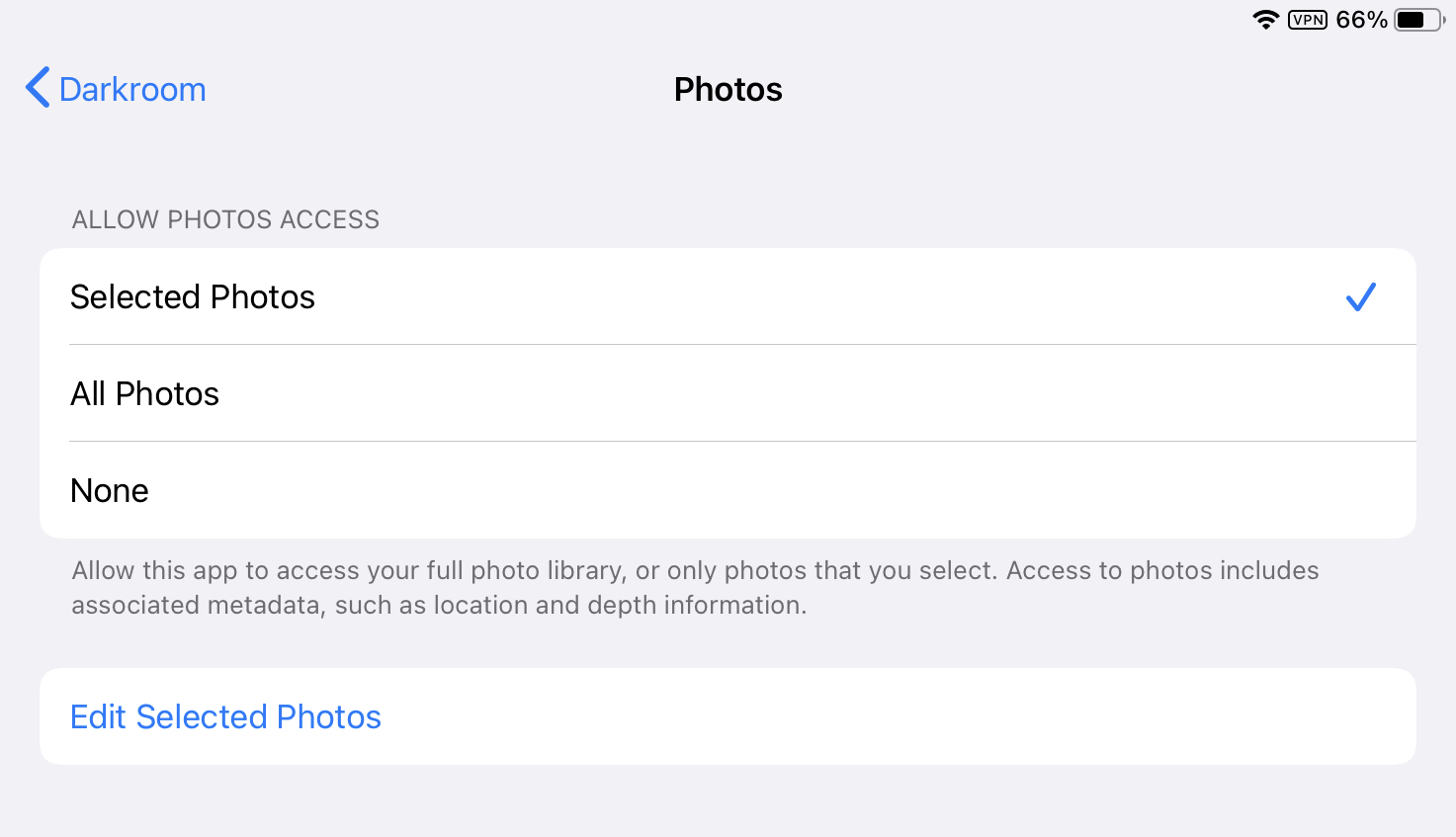 In iOS 14, Apple has introduced the ability to share limited access to your photo library and contacts. You now get a third option for ‘Selected Photos’ along with ‘All Photos’ & ‘None’. When this option is selected, you get a new photo-picker that allows you to only share the photos you select, instead of giving access to the entire library. Similarly, iOS 14 will auto-complete the details of only a specific contact that you type in an app instead of having to give access to all your contacts. Big win for privacy.

iOS 14 (and macOS Big Sur) Apple has enabled sharing of app subscriptions with your family members. As long as developers opt-in to this, you can subscribe to an app once and share all the premium or pro features of the app with your entire family.

The Voice Memos app, that often feels like an app Apple has neglected, has gotten a big feature in iOS 14. You can now “enhance” your audio recordings in the app with a quick tap. 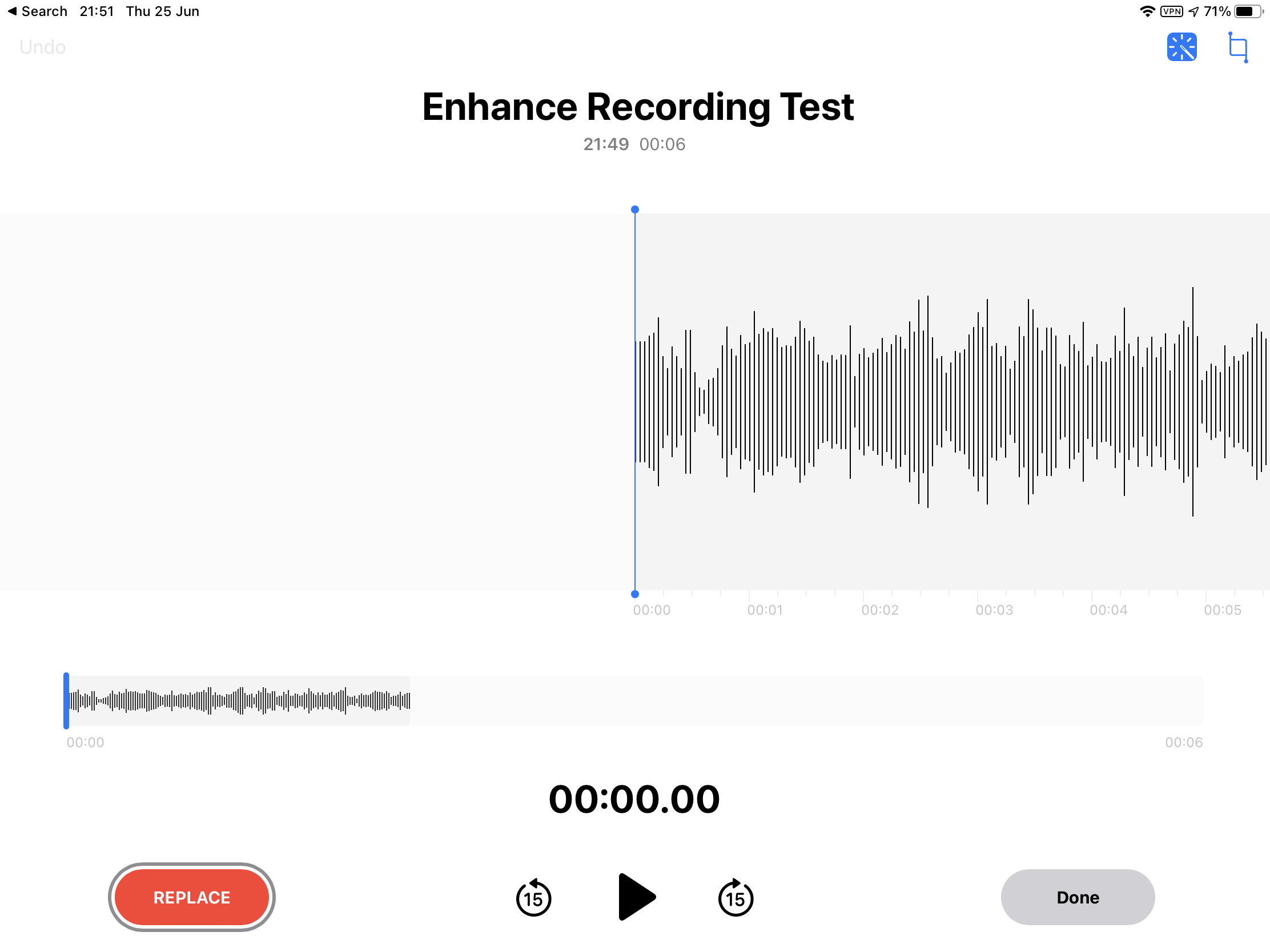 This feature automatically reduces any background noise and room reverberation that may have been recorded in the file, giving you cleaner audio to use. To use this feature, tap on the magic wand icon at the top right when you’re in the Edit View of a recording.

I may sound biased here, but this is by far the most exciting feature that iOS 14 is set to introduce in the Fall when it is released publicly. Apple has allowed the ability to set third-party email apps (along with third-party web-browsers) as default apps to replace Mail and Safari respectively.

This means that you can now set Spark Email as your default email app on iPhone and iPad and enjoy the best email experience on your iOS device.

That’s not all, there are some incredible new features that we’re excited about adding to Spark, so stay tuned to this blog and Follow us on Twitter for updates.

A public beta of iOS 14 is already available, and you can try it now. The stable, public releases of iOS usually happen two months after that, so you'll be able to upgrade your iPhone or iPad to iOS 14 around September. If you currently have an iOS device running iOS 13, you will be able to upgrade it to iOS 14 as Apple has officially announced support for all iOS devices going all the way back to the iPhone 6s.

iOS 14 and iPadOS 14 are some of the biggest announcements that Apple has made in recent times, and the sheer number of features that they have bundled into this release has us very excited about the future of their platforms. Our developers have already gotten to work on the next set of features & improvements to all of Readdle's products, and we can't wait to show you what we have on our roadmap. 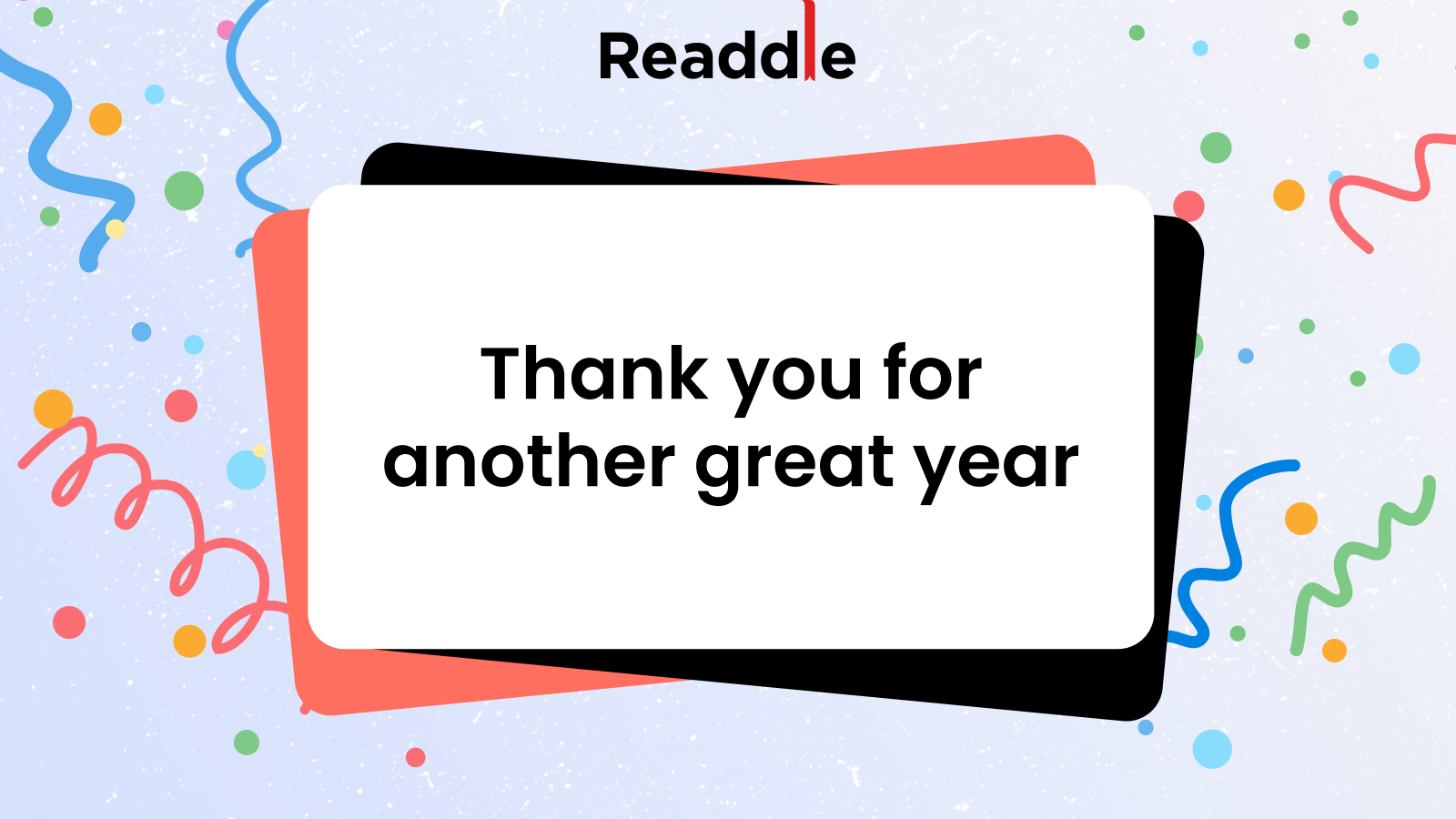 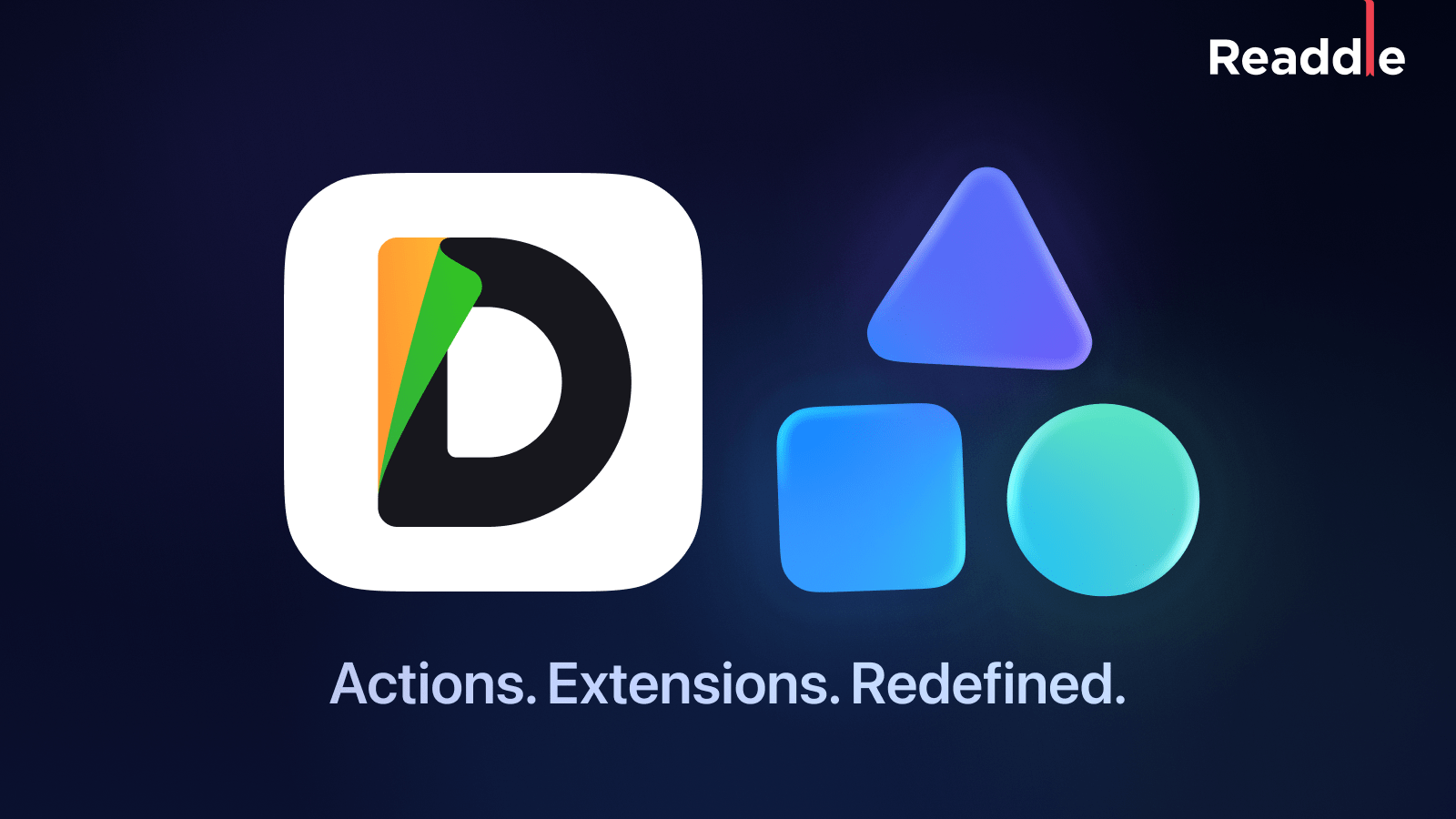 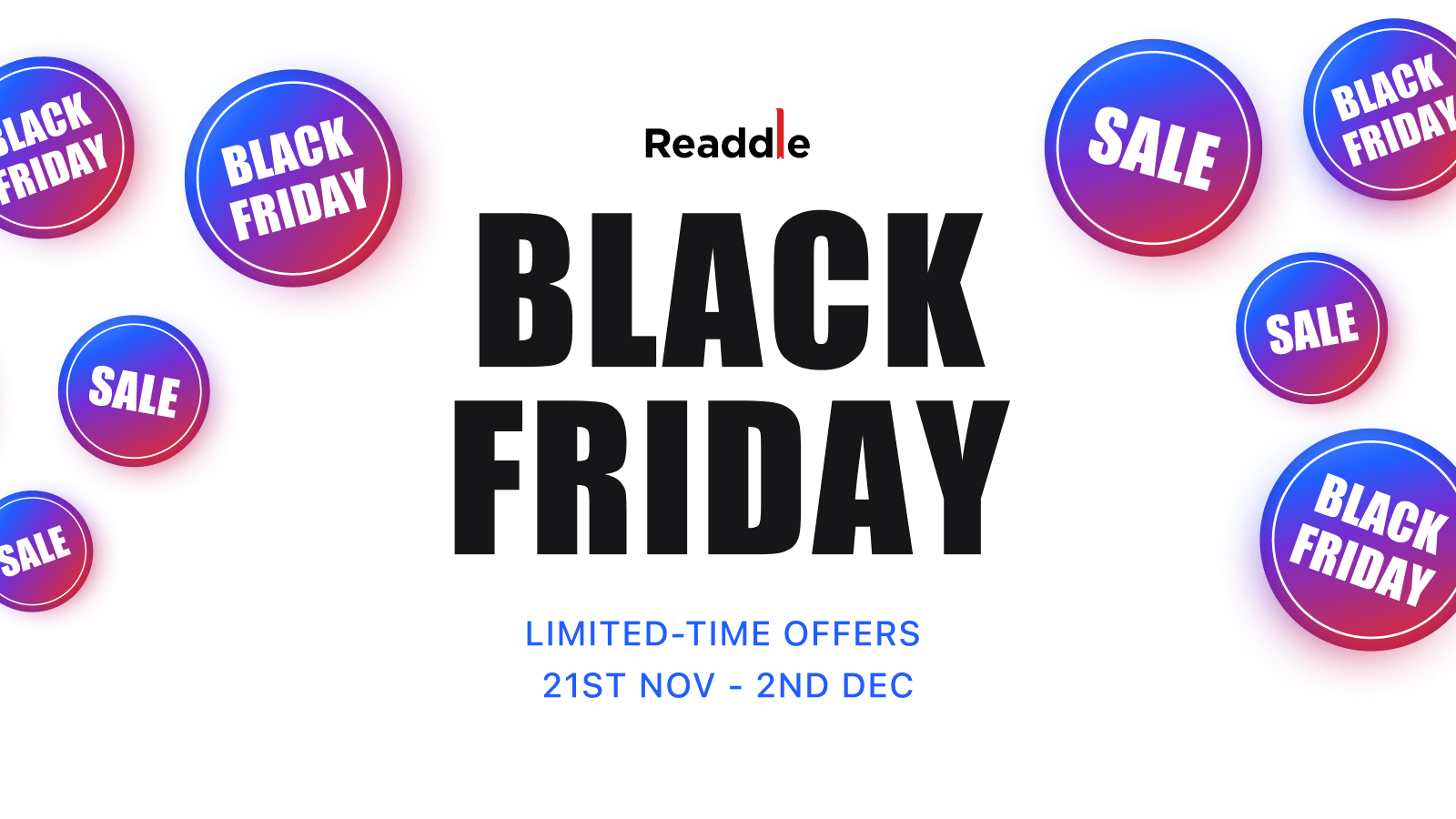